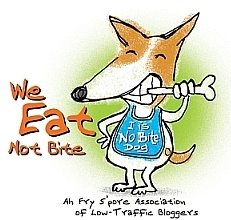 Here's the thing, ever since I returned to Singapore 2 years ago, I kinda lost my blogging mojo.

I thought coming back to QQLand, I would be able to get back some of that momentum but somehow the workload does seem to allow me to do so.

I am a professional blogger in the sense that I blog only during office hours. wakakakaakak

Come home liao, I ish a nuah slug with 1,001 distractions to do anything but blog.

As a result, it is no surprise to see my visitor hits taking a beating and sliding down steadily.

Well, not that I really cared anyway.

So, I have decided.

I am going to join Ah Fry Singapore Association Of Low Traffic Bloggers! *Throw confetti and steal badge to paste on my right widget column*

Speaking of Blogger Association, I am suddenly reminded of something else. Show of hands who still remember the Association of Bloggers (Singapore)?

Here's a few links to jog your memory. Enjoy.

2. JayWalk left...
Barffie: Then add the badge and join us. Your $110 per annum subscription is waived!


Singapore was hit by another flood again and it is starting to get embarrassing for the Gahmen who has earlier dismissed it as a freak accident of nature that occur once every 50 years.

Last weekend, we were hit with another bloody downpour (We are going to have a Waste Water Campaign real soon) and a certain Mr Shafie Goh from Lianhe Wanbao was on assignment to cover the event.

He was at Bukit Timah where the flooding occur and, by looking at the pictures, he appeared to be at Maplewoods (just further up from Tan Chong Motors) where he was detained and cuffed by a policeman.

According to Shafie, he was there minding his own business and taking photos before a policeman who was earlier sitting in the police car came out to stop him from taking photos. When he refused to comply, he was cuffed and taken away to the side before being released an hour later.

According to the police, Shafie was taken away as they felt that he was endangering himself during the process of taking pictures and/or perhaps obstructing police work and/or traffic.

It was a case of his word against the police.

I find it hard to figure out on a few points.

That said, why the gangster tactics?

The way the police handled the situation cannot be explained and I for one am keen to find out how the police is going to recover from this PR booboo.

I wait with baited breath.


It is official. Drinking beer does make you lose weight.

Thanks to Timothy The Dawg for showing me this on Facebook. :)


We have had a streak of nasty storms in Singapore recently that our Gahmen unapologetically claimed that this type of freak storms only happens once every 50 years.

Within a few months and a mega foot in the mouth, we were hit big time again and they blamed it on vegetation in the drains resulting in poor drainage.

Now our PM say to give up all hope of no flooding evar.

I found this longkang sibeh tok kong. The above video clip had to be shot with high-speed film as a result of the speed of drainage.

Yes, it is THAT fast!

Our dear Yacob-boy need to take a lesson and watch this.

Sleeping Under The Stars I stay quite high up in a condo apartment which gives me a great view of the outside, albeit mostly old dirty sooty factories.

So there I was this morning, brushing my teeth and looking out the window and I spotted this couple sleeping on the rooftop barely clothed.

As you can see, it's really hard to tell but when I zoomed in using my Lumix's 3X optical zoom, it turned out to be just a couple of half naked guys sharing a straw mat. *sian half*

The weather recently has really been crazy with temperatures breaching 37 degree Celsius just the other day.

So while I can understand these guys sleeping on the rooftop but er... the rooftop a bit DIRTY right???!!

1. Hamie left...
like tat slp under the stars then lormantic mah. kekekeke...... (Click Image To Enlarge)
See the bottle floating in mid-air? Spotted this while having dinner in Bangkok.

Make a guess then go to the comments section to see what that is all about.


- Voxeros
1. JayWalk left...
What it is actually, is that there is an invisible string (think thin fishing line) tied to the bottle and suspending it in mid-air.

What it does is that the bottle, filled with water, acts as a counter-weight to keep the door closed at all times as that door leads to the kitchen.

It is an ingenious and cost effective solution to that of the auto-closing mechanism.