By right, I should be featuring the match winning point above but Lisicki won that on account of Schiavone's double fault and so essentially, it wasn't a point worth my top billing. Instead, I put up Schiavone's save of the first match point.

I was in Hong Kong two weeks ago to watch the semi-final games but was too busy to update it on my blog until now.

Anyway, the other semi-final was between relatively unknown duo of Pliskova (Karolina) and Van Uytvanck.

Anyway, it was a b-o-r-i-n-g match and kudos to the organisers for having the foresight to place them as the first semi-final of the day where at 3pm in the hot afternoon, the place was about 1/4 filled.

There were sparks of brilliance from time to time between these two ITF graduates but they have a long way to go as far as paying their dues is concerned before being able to be regarded as serious contenders in the big league.

The disparity in levels between Lisicki and Pliskova was evident in the final the next day as latter young padawan was schooled 7-5, 6-3. 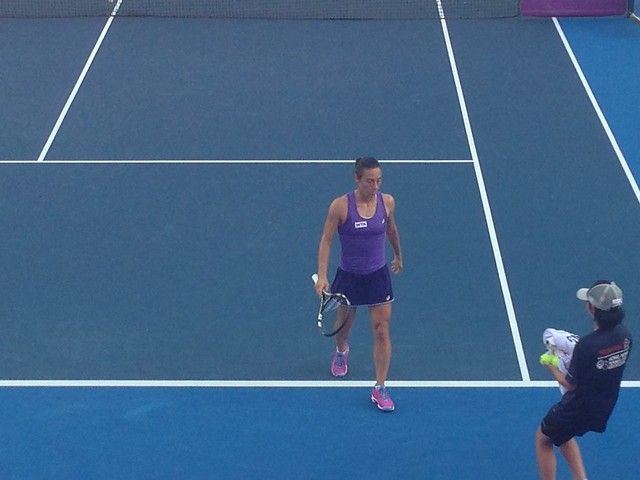 Coming back to the semi-final between Lisicki and Schiavone, everyone was rooting for the underdog Italian as the 34 year-old put up a gutsy display against the German who is 9 years younger.

We were awed by her never-say-die attitude as she hunted down every stray ball covering every squared inch of the court.

Win or lose, as far as the point was concerned, was met with big applause from everyone. Perhaps it was everyone's way, including mine, giving her an "A" for effort.

My thought next, goes to the tournament itself. The Prudential Hong Kong Tennis Open 2014 is a tiny tournament where the winner goes home with just 280 ranking points. This compared to the Grand Slams (2000 points) and the WTA Premier Events e.g. the current ongoing Wuhan Open 2014 (900 points). The down side to this is that with fewer ranking points and smaller prize money, you aren't going to attract as many big names. In fact, for this particular tournament the top seed was eventual Sabine Lisicki and she was ranked back then as 28th. We won't be expecting the likes of Sharapova, Williams, Kvitova etc to grace the event.

The up side on the other hand is that smaller tournament means smaller venue, means we are up closer to the action. And yeah, cheaper ticket prices too.

p.s. My favourite day of the tournament is actually the quarter-finals where, IMHO, the ticket price gives you the best value for money. The price of the ticket grants you 4 matches to watch in a single sitting. Compare this to the more expensive semi-finals (2 matches) and most expensive ticket final (1 match). Earlier rounds can be boring as players hold back on the throttle to avoid peaking too early and so the quarter-finals is the turning point where players step up their gear in terms of play intensity as they are just a mere two steps from victory.

Click Here To See --> The rest of the HK Open 2014 photos as well as the video of the match point between Pliskova (Karolina) and Van Uytvanck.