Chen Show Mao via kwout
mrbrown highlighted to us, back in December 2011, Chen Show Mao's facebook test status while being an entry of zero content, it still garnered 45 "Likes" and 19 Comments (See below).

All for a blank entry.

Popularity is one thing but it isn't worth anything. Chen Show Mao is lucky that at today's current level of technology, people are not yet able to fling their panties at Chen Show Mao via their monitor screens.

This reminded me of the US elections back in 2000 where despite Al Gore winning the popular vote (48.49% to Bush 47.97%), he lost the presidential race to George W. Bush simply because electoral vote was what decided the presidency.

Same goes for our recently concluded General Election 2011. The opposition won 39.9% of the votes but yet out of the 87 parliamentary seats available, the opposition won only 6. By simple percentage arithmetic, it should have been 34 but that was not how the rules were set.

Support is important but it has value only when it is converted into electoral presence.

Electoral Presence is important but it has value only when it is converted into valid votes.

The disunity amongst the opposition parties was what threw the Men In White a lifeline during the last election.

Will the opposition learn their lesson in the next General Election in 2016?

We shall wait and see. 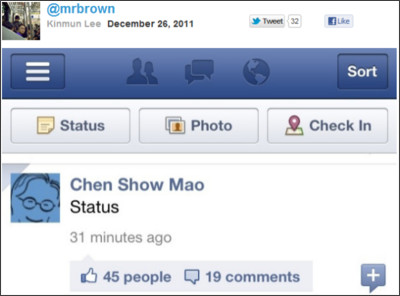 Opposition MP Chen Show Mao posts a test message on his Faceb... on Twitpic via kwout
- Voxeros
Posted by JayWalk at 08:35