As I have mentioned yesterday about my golf tournament, the outcome came to me as a pleasant surprise.

The weather was fine except that it was uncomfortably humid. It had been raining for days as a result of the passing typhoon a few days back. The sky was overcast with clouds but dry nevertheless.

I open my first hole with disastrous result, landing my tee-off straight into the bunker. It wasn't as bad considering that while it was wayward in terms of direction, it was still quite a good distance drive with 130 yards to pin from the bunker. Problem is that it took me 3 stroke from there to get to green as a result of the ball in awkward positions the prevented from having a good swing at it. 7 for the Par-4 first hole. Ouch.

The rest of the front 9 was pretty bad as a result of my wayward driver, if not for good saves thereafter and having to rely on big putts just to save bogey, the score could have been even more embarrassing.

Then the sky opened up and it started to pour. I am used to playing in extreme weather conditions and this wasn't really a problem for me. Rain coat has always been ever ready and sitting in my golf bag together with a spare pair of gloves in case the present one soaks up so much water than a good grip on the club is no longer able.

The thing is that playing under rain conditions require another set of strategy for example: 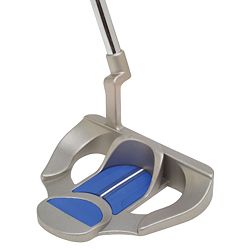 In all, I made a great comeback on the back 9 and storm back into contention with a display of near flawless golf and finished Nett 2nd Runner-up overall.

I am very happy with my latest investment of a new putter, the PING G5i Craz-e H putter. My previous 33" Odyssey Rossie II that I have used for the past 11 years was swiped by my uncle in exchange for his longer 34" Odyssey White Hot Rossie. Strange how much ONE inch makes as I was forced to get another 33" putter as the 34" one was unplayable as far as I was concerned.

Anyway, the 2nd-Runner Up ended a trophy-less dry spell of 20 months or so but also partly due to the fact I have not be active in the last year due to work commitments.

The crystal trophy is Number 12 on my cabinet, bring my tally to 1 win, 4 runner-ups, 3 second runner-ups and 4 technical prizes (e.g. nearest to pin, longest drive, etc.). 
1. hiaoauntie left...
congrats on being 2nd runner up

6. JayWalk left...
Gary: That one is lucky draw prize so cannot be counted lah.

8. JayWalk left...
Barffie: Don't like that lah.... this type of thing don't come often mah.... so must milk it until the very last drop. Anyway, as we I have new entries coming in, it will be slowly push down into oblivion lor. 2 weeks ba?

10. JayWalk left...
Kelly: I hover between 12 and 13 but this particular tournament, they gave me 19.2 and so I shamelessly hantam liao lor. wakakakakakakaka
Posted by JayWalk at 15:17