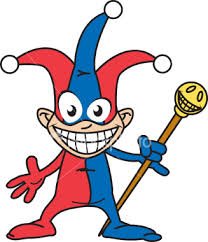 From the crew of Mistress Grace, CowBoyCaleb, JesuaFreak, CowGoesMoo, Cool402, Dowagr and myself, we would like to wish everybody, especially those in the CowBoyBar, a Happy April's Fool Day!!!\

So what is the con of the year?

There is no such person as Nurse Debbie Koh!!

Yes, ladies and gentlemen, we created the fictional character and took turns playing her role on MSN as well as the in the CowBoyBar!

Anyway, while it was just pranking fun, we do apologise in advance if we have hurted/cheeted/bruffed your fweelings.

The idea of Nurse Debbie for April Fool's Prank 2008 was conceived 3 weeks before D-Day. There were quite a bit of preparation work done prior to launching her onto the CowBoyBar.
Anyway, to all those who got duped. Happy April Fool's Day! Don't kill us!!

We have created a Nurse Debbie Award 2008 for the one we think was most duped. There were many candidates but it was decided that the winner is.....

When the quarrel started, Barffie was so kan cheong that she MSN-ed me to help resolve the conflict since I was the common denominator between the two bickering parties.

Barffie as we can see, is a kind soul who had the misfortune to kena set up by us.

Sorry lah... dounch angwee ok? We buy you supper when I come back, ok?

Yes, ladies and gentlemen, this is the CowBoyBar for you. A bladdy haywiring town of anarchy. Sign up @ http://cowboybar.liquidblade.com today!

2. JayWalk left...
Waffles: Welcome to the blog. So you may have escaped this year. I wish you luck if you can get away next year!

Sunflower: That's Betty Boop, a character from an old cartoon.

ruok: I don't supposed the first fake female would be you? Or you you referring to KM in his pinafore during Virtual Insanity?

9. Missy left...
if we keep really quiet, we can hear the hundreds of disappointed sighs/grunts.

11. JayWalk left...
davienne: Welcome to the blog! Glad you enjoyed the prank. Man... it has been a tough 3 week pulling this one off!

Missy: Counting the number of cheehongkias we have in the bar, I would say you are probably quite accurate on that count. =P