Dumbass Of The Week VI

Hiao Auntie send me this news article where "Ah Boy" from the local sitcom Phua Chu Kang was sentenced to 1 week in Detention Barracks (DB) which is the military equivalent to prison.

"Ah Boy" aka Marcus Ng Yi Loong (Picture left) may not ring a bell to many but if you were an ACS boy or old boy, you would definitely remember this asshat as the punk who dragged ACS (ex-Barker Road, now International) Principal, Mr Ng Eng Chin (picture below right),  through a year's worth of mud with false allegations of molestation way back in 2001.

Mr Ng Eng Chin (NEC, as he was more fondly known back then) was my Discipline Master during my time in secondary school. For all the years that I have known him since, NEC is a good and straight up guy in my books. So when the allegation that he molested Marcus during a counseling session, I knew right from the start that it was a bogus lie. There was never a doubt in every cell of my existence to believe that NEC would do such a thing.

At the end of the investigation which dragged over a year, he was unanimously cleared, by the Panel of Inquiry, of all charges. In most cases, it would be a great relief but our faith in NEC was so great that there was no relief to speak of as we knew from the start that the investigation was merely a formality and that acquittal was inevitable.

Yes, NEC was exonerated but to be dragged through the mud bringing stress and hardships to him, his family, friends and supporters was certainly uncalled for.

Marcus Ng as far as I am concerned is a trouble making delinquent that ought to be hantam one time jialat jialat.

I rolled my eyes when I read that his mother told the press that "He (Marcus) is a well-mannered, humble and respectful person despite finding fame early..."

It makes me wonder if his mom is of sound mind or deliriously in denial.

Let it be known that a year after the investigation, at the age of 17 and no longer in the school, was put on probation on charges of assault and theft and a year before this case, he was convicted and fined SGD 1000.00 for disobedience and non-compliance.

To this I would say to Marcus' mom. Well-mannered, humble and respectful. NOT! 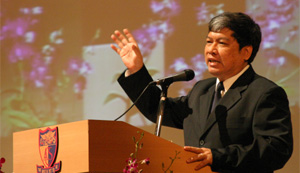 By the way, here's an interesting tidbit that I bet most of you would not have picked up. Marcus' family hired Drew & Napier's Wendell Wong to defend them.


Of all people Wendell Wong. Oh, the irony!

Mr Wendell Wong was ex-Deputy Prosecutor and tracing further back was Head Prefect of ACSS'87, President of the ACJC'89 Students' Council Ex-Co and one of the youth leaders of the Barker Road Methodist Church. In other words, he is a true-blue ACS boy and here in the ACS family, when you mess with one of us, you mess with us. That how strong our school spirit is.

Click Here to see the Support For Ng Eng Chin page from the ACS Class of 1975.

1975!! That's more than 30 years ago. Old Boys from 30 years ago showing support and standing behind the good man. How's that for school spirit?

Anyway, kudos to Wendell for his integrity and discharging his duties without prejudice under the circumstances. To this, I am humbled for if I were in Wendell's shoes, I would have to request to have myself taken out of this case for I would sure to be the "goalie that would purposely leak a goal or two".

I sincerely hope that you would spend the time in DB to seriously reflect on your past mistakes.  May you come out better and be a decent person.


If not, please continue to stay inside until you've truly learnt your lesson.

Try picking a fight with the warden or something.

3. aloe left...
oo.. I know abt the NEC case, but I din know it was MNYL who brought up the allegations! He's not say very shuai or very famous loh.. duh... I tink he saw his drooping figures in popularity and hoped to up his stakes and become infamous instead. duh..

4. JayWalk left...
Cow: In my experience, nobody like to charge people due to the extra paperwork. As such, most of the punishments are merely extra duties, confinement and or defaulter's parade.

Marcus's must have been quite serious for them to formally charge him.

Aloe: Let's see him do a Paris Hilton while in DB lor.

6. JayWalk left...
Cow: Only when the problem is quite serious. Usually for the MT Line, trying to resolve matters internally is the default first course of action. It's not as trigger happy as you make it out to be.

7. Ed, Edd, Eddy left...
Well, one week means he won't be tekan so jialat like so long term ones. But it's still humiliating. Have to shave hair, squat while waiting, call the corporal MPs SIR, shit while MPs are watching you. Generally, a huge lost of privacy, and damn humiliating.
Hm, reminds me of the days when I was a MP back in NS time.
All in all, DB experience very depressing. It might wake up his idea though.

9. JayWalk left...
Eddy: DB even for a day is not a good thing. So he made a mistake and is made the serve time. I hope he doesn't repeat it again.

Winsor: I supposed the definition of delinquent is subjective. As you can see from my chatbox, fellow visitor Alvin seems to disagree with me on this.

10. Winsor left...
subjective yes. I believe Alvin is entitled to his opinion as well as you are, or anyone else for the matter. Keep it up! =)

11. JayWalk left...
Winsor: I always keep an open mind to hear other people's opinion. I will never say another person is wrong. At most is just me disagreeing that's all.

I will leave comments and shouts intact as long as it is not abusive.

12. hiaoauntie left...
I am glad you posted this article up. I had the good fortune to meet NEC last year and I had found him a good person, Christ-like and very concern that his students not only just play, but also study hard to make the grade. I am glad to have put my son in ACS but so sad that NEC is no longer the principal starting Jan 08. NEC had shown that he really cared about my son's future and had elicited a promise from my boy that he would not play the fool when in ACS. My utmost respect to NEC. Thanks for telling the world that this Marcus guy was wrong.

13. JayWalk left...
HiaoAuntie: There is no need to thank for writing what I felt is from my heart. I am glad you have the good fortune to know a great man as I had.

14. ACSClassOf'91 left...
This Dumbass put NEC and his family through more than 1 year of hell. I've known idiots like this before. They hate the teacher so they cook up a story. What a f**ker. Well, things have come full circle and I'm surprised it happened so fast in Marcus' case. Really incorrigible. Reading what the mother says of her son, she really doesn't have a clue. Truly tragic. Mark my words, this guy is gonna be a liability to society.

15. JayWalk left...
ACSClassOf91: Welcome to the blog. Marcus will get what's coming to him. Still, he is young and I hope there is still time for him to wake up and come to his senses and right all that he has done wrong.
Posted by JayWalk at 12:06