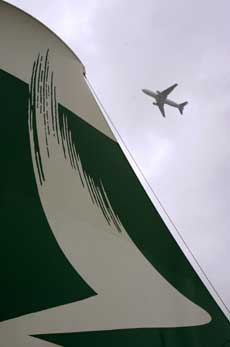 Flew to Los Angeles en route to Las Vegas this Sunday on Cathay Pacific. The cabin was refitted with the new configuration where Business Class gets the total lie flat bed seats in Herring Bone format and the economy got refitted with a new seat and a brand new inflight entertainment system with loads of movies.

Problem was, the seat cushion was thinned out and very hard. My ass hurts.

Anyway, I saw the following:

1) The Indian Man - I was waiting outside the toilet for my turn and boy was it a long wait. I thought maybe the person, as per an earlier anecdote over beer by CowBoyCaleb, was passing out a doodie the size of a baby anaconda and that the person didn't know what to do next when the turd just wouldn't go down?


What would you do?

So anyway, the man finally did come out and just before I stepped in, I was like "How come the whole toilet is wet?" The sink and the entire deck is wet, the floor is wet, the toilet cover is wet. WTF? It was as if the bugger took a shower in it using the sink tap!

Then as I lifted up the toilet seat cover to pee, I saw remaining traces of toilet paper unflushed.

2) The Indian Grandma - For some strange reason, there were a lot of Indians heading to Los Angeles on that flight and this was my second trip to the toilet when I was at the "anaconda toilet" where this little old lady was struggling to get the toilet door open.

I gently took her frail hand away from the wall and place it on the door. She pushed again. Voila! C'est miracle! Open sesame!

Good luck with all the water in the toilet!

I gave that toilet a miss and proceeded all the way to the back of the plane when I saw...

3) The Sleeper Seat In Economy Class -  This Ang Moh guy was originally seated in the emergency exit row i.e. a lot of space in front of him as a result of the big exit door. The only thing was that he was totally decked out and asleep on the floor space in front of his seat. Sure, it is most comfortable but definitely not the smartest in terms of safety.

In the cubicle at the end of the plane, the whole place rocked quite a bit but it is expected and common as a result of the plane's tendency to fish tail.

There I was thinking, perhaps the plane should rock a bit harder and we see how the ang moh is going to get flung up against the ceiling and back on the floor. I silently chided myself for such bad thoughts and I realised it would be perfect karma for me since I too was unsecured in the toilet and worse...


.... my pants were around my ankles. It would been most unglam should the worst happen.