Put Your Gun Down 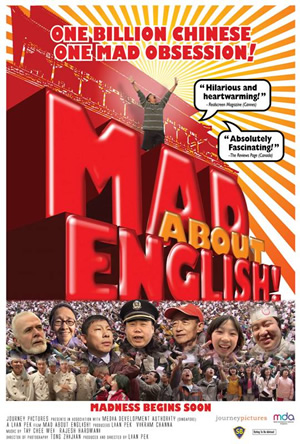 Got this youtube from Gary and it's the trailer for a coming docu-comedy directed by our fellow Singaporean Lian Pek, due to be officially released on 7 Aug 2008, the eve of the opening of the Be1Jing Olymp1c Games.

Some people have complained that this is a film produced to mock the Ch1nese people for their bad English. However, I thought the contrary as I felt, based on the trailer, that this is a light-hearted and inspiring film. It shows us the effort of the Ch1nese people are putting in to make sure the foreign guests feel welcome and comfortable in Ch1na. Then perhaps some time in the future this generous hospitality may be reciprocated to them when the Ch1nese people go visit them.

Sounds like the perfect world isn't it? Well, yeah and that's the direction that we should be heading for. Peace comes from understanding and embracing, which in turn comes from open communications.

As terrible as lives are lost in these conflicts, the one thing good that came out from it is that we learn the costs of going to war vs the benefits of maintaining peace. Fortunately/Unfortunately, this learning is still an ongoing process but looking at ourselves from Day 1 to the present day, mankind is significantly less trigger-happy now. We still have quite a bit of ground to cover to the eventual utopia stage of World Peace *bimbo beauty queen wave* but I believe we will get there eventually.

So coming back, the bottom line is all about understanding and embracing each other for who we are and that comes from the fundamental basis of communication. Hence, it is time to work together and tear down the Tower of Babel and reunite as one people again.

Coming back to the trailer. It is very encouraging to see the Ch1nese folks learning to speak English even if it spattered all over the place. At least they are trying. I have know quite a few friends who have migrated to the US for more than 10 years and yet their level of English is quite pathetic. Why? The fear of speaking it. Perhaps it is in the Ch1nese DNA, that losing face when speaking English poorly scares us.

I always tell people that as long as you are able to get your message across correctly, the job is done regardless of how the process of delivery is done. The job is done.


1. spiller left... haha. the "gong-an" in the end damn funny.
"put your gun down" LOL
2. JayWalk left...
spiller: Yeah, initially I was not that amused since faking an American accent is fairly common not just in Spitland but our own backyard too. But to hear him go "put the gun down" is classic.
Posted by JayWalk at 16:09