Fern was a nurse in a local gahmen hospital when I was in the NS. We met on a group date at Singapore Indoor Stadium where there was this International Ballroom Dancing competition going on. If you had followed the story in my School Boy series, you would have realised that the meeting was purely by chance. It was a case of she was there and I was there. I liked what I saw, I asked for her number and we went out on a date again.

While relationships may take some time to come to fruition, we were there in one single leap. We were together even before the first official date was over. I guessed that's the thing about being young and hot-blooded as we took the world by storm.

She came from a very conservative family where at the age of 18, she still had a curfew imposed upon her. The father was a strict man who still think her little girl was too young to start dating. This made everything lagi exciting as we had to keep everything hush hush.

It was an adventurous period for me as we were playing cat-and-mouse, cloak-and-dagger. There was even this one time I have to resort to hiding in her wardrobe when the folks came home unexpectedly. Friends in my inner circle would also know the "other" story with her braces. For those who wants to know hear about it, two conditions must be met. 1) I will need to tell you in person and 2) I will need to be pretty buzzed when I tell you the story.

Coming back, it was a time before mobile phones and the numeric pager was as advanced as a guy can get as far as staying contactable is concerned. The best part of a relationship is always the honeymoon period but it's all downhill from there. The honeymoon period is akin to the proverbial "beer googles" where everything and anything is all sweet and dandy at that time. When the dust settled and the euphoria dissipated, the ugly monster in her started to rear its ugly head. 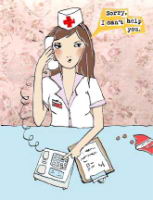 The thing about being in NS is that you do not have free access to the telephone as and when you please, which means that it may be sometime before a bloke is able to return a page. A concept that was sadly lost on her.

Man, was she persistent in the paging department as my pager beeped and beeped and beeped non-stop. I even had to cook up some stupid excuse in order to sneak to the public pay-phone to return her page. Just when you though the furious paging was for something urgent, she "just wanted to hear my voice". *facepalm*

After a few subsequent cry-wolf occurrences, I turned to taking my time to answer her page and boy did it really upset her. Every page that I returned thereafter ended up in a shouting match which left both parties upset. And no, there was no make-up sex. It would have been fantastic though, but no.

Anyway, this went on for a few more weeks until I reached breaking point and I dumped her.

I bought the Motorola Bravo Plus pager shortly after. It had a silent vibrating mode. The earlier NEC model only has loud and fire alarm mode.

1. akk left...
haiz...youngsters...
Did the episode leave a bitter taste in ur mouth after that?

2. JayWalk left...
Akk: Whose mouth? Er.... don't answer that!
No lah, no bitter taste for after all, we all have our own quirks here and there. That's just her I supposed.
Just not my type lor. Too clingy.

3. milktea left...
i like your analogy between honeymoon period and beer goggles. very true.

4. nadnut left...
hmmm. we all have to meet a few wrong ones before meeting the right one. =)
wassup with the braces man? lol

Nadnut: You will need to get me drunk then I will tell you the story. R(A) rated. You old enough to handle it or not?

8. Sheena left...
Hahahahaha... I think all girls of 18 are like that lah. I was like that too with my bf before Andy. Luckily the guy was a clerk in NS and could call me often. And same thing - if he didn't call me, I blew up!

Anyway you only hid in a cupboard once? There was a period of time when the cupboard was Andy's second home. He was in it everyday. His personal record is being in there for 4 hours. He's done everything man: hiding under my bed, behind my door, climbing in and out through my study room window...

10. Sheena left...
Haha... Oh yeah, and my mum caught him nude in my room before. Twice, too. Dunno if she saw anything though. A few times she did catch him in my cupboard. Ahhhhh... those were the days.

I can't blog about it lah, Andy would flip. Then he'd say I'm making him lose face on my blog. He's got a huge ego you know!

11. JayWalk left...
Sheena: Hmm... reminded me of a friend who caught her mom's bf in the cupboard.
I think that would be lagi traumatic for her man.... at least your Andy is not wrinkled and pruned in the cupboard!

12. Zhe Bin left...
Haha in my warped mind hor, only 2 things can happen with her braces lah. I think I keep to myself = X
Were you her first bf? That's why she's more 'niam'.

13. JayWalk left...
Zhe Bin: I got a strange feeling that you would probably get it right on the first guess. But don't try!!!!!
~LOL
As for the question if I was her first BF? I have no bladdy idea. Didn't ask.
Posted by JayWalk at 22:17