The rest of the partying was a blur recollection at best. I had no idea how I ended up lying on the street right outside Chaplin's, with the pavement as my make-shift pillow. I did, however, remembered a couple of policemen coming over to check on me. I also remembered her coming over shortly after. Not exactly the image that I wanted to project but alas it was too late for me to just rolled myself into the longkang behind. I guessed my only consolation was that my shirt and pants were still intact.... and oh yes... I also remembered she was wearing pants (not skirt) when she hovered over my limp drunken corpse.

One month later, I was at Chinoiserie (where Grand Hyatt's Mezza9 now occupies). It was the last Friday of the month i.e. Madhatter's Night. $25 cover for 6 drinks if you were wearing a hat. And there she was again with Wing. And yes, she remembered me but for the wrong reasons though. Still, I told myself that it beats not being remembered at all. This time round the group was smaller and so we had the chance to talk and gotten to know each other. Embarrassingly, that was the first time I caught and remembered her name. I got her number that night and called her a couple of days later. It took quite a few phone calls and emails before I gathered enough courage to ask her out. (I found out after we married, that she was getting impatient with me then!) 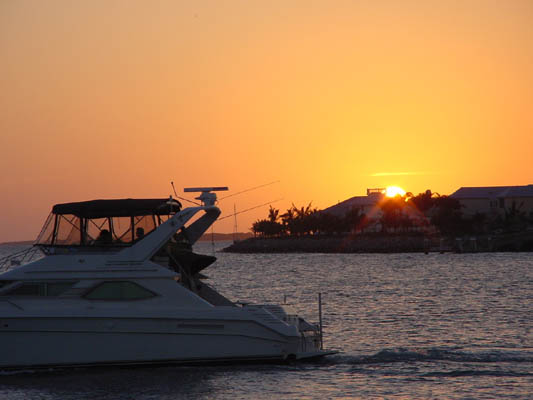 I took her out to sea for the weekend and anchored off the far side of Pulau Ubin for the night. We talked through the night on the boat while the rest of the people retired to the kelong. It was a memorable night. Just she and I, the moon above us and the gentle waves lapping below. Just chatting the night away.

We went out for a while more before we were together as a couple. 3 years later, we were married.

When we told everybody that we were going to get married, the news didn't go too down well with my friends, for they all expected me to be the last one to sign on the dotted line. Everybody jaw dropped, "knowing my type", unquote. Wah raoz.....

I kena many "can-I-talk-to-you-in-private" sessions with my close buds. The question was always the same. "You knocked her up, didn't you?" Bladdy heow......

Well, I proved them all wrong for we had Faith, 5 years later. Hah!

Though what my friends say were partly true (the good parts!), marriage then was a surprise even to myself. However, deep inside, I know she was the right one and it may just be a one-off window of opportunity that may never return again. Carpé Diem. I followed my heart.

If I were to describe her in one word, it would be "Independent". Strong woman that she is, that isn't "super-glue" type, like some of my ex-es. Everything also handle swee swee. Do not mistake this as she mothering me but rather we were both able to do more together as a partnership.

However, this independent thingie did take me some time to adjust to. It started with...

Chuan: Eh, Is anyone bringing curry chicken to the potluck at your place? If not, then I am going to.

Me: Huh? There is potluck dinner at MY place tonight?

Deek: Hey, did you know that... oh wait... nevermind... you only sleep there one. By the way, dinner at your place tomorrow at 7pm. Don't be late.

I am actually fine with it now. It's like the Captain giving the control of the plane to the auto-pilot so that he can go do something else. In a way, it was a kind of freedom. Very refreshingly liberating.

These couple of years have been tough on us as I am based overseas while the wife had to single-handedly take care of Faith during the first year. It'll be the cycle all over again when Gabriel arrives, and even more challenging for her to juggle the two kids at the same time while I can offer little help or presence. However, the end of the tunnel is near as they should be moving over in Spring next year.

Anyway, thanks for everything, dear. Happy Mother's Day and I'll see you in 2 days.