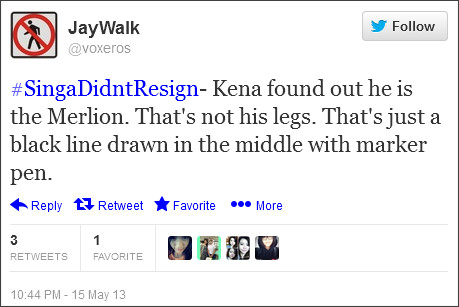 
The news set the social media abuzz but JayWalk Online is here first to expose the smokescreen.

It was not because Singa was "too tired" after so many years and making no headway.

It was in fact, that he was outed to have a second identity which contravened Singapore Kindness Movement HR policy strictly forbidding dual employment.

According to SKM's public relations manager Ms Yu WeiShi, "We are deeply disappointed to discover this deceit. It has over turned all the hard work that we, through Singa, has put in over the years. Singa has been asked to leave with immediate effect due to conflict of interests." The disguise was so simple, it was clever. All it took was a black marker pen. Draw a broad dark line down the the tail et voila. A pair of legs!

If only Ariel knew this!

So what about the tail sticking out from behind if Singa has already has the alleged tail?

That my friends, is the antenna like that of the angler fish, except this one is located at the posterior section instead of the forehead.